skip to main | skip to sidebar

Coding Dojo demonstrating the power of reflect and adjust

Well I think the Coding Dojo last Thursday was quite successful despite some scrambling in the beginning.  Thanks to Matt Ryall for organising things at Atlassian and all the participants for showing up with really only one days notice.

From the discussion at the end, our current plan is to run these monthly so stay tuned...

There seemed to be quite a dramatic improvement after a quick retrospective we held in the middle so here's a shot of the board (also includes additions from the retrospective at the end) (click for larger version): 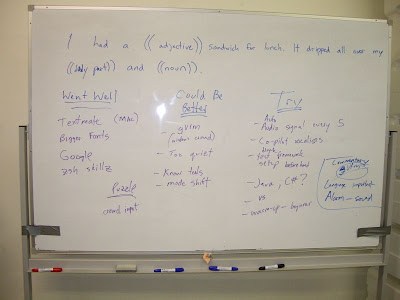 Thanks for running the dojo, Jason. I found it really interesting to do the exercise with frequent pair rotation.

Picking up a bit of Ruby was great, too.